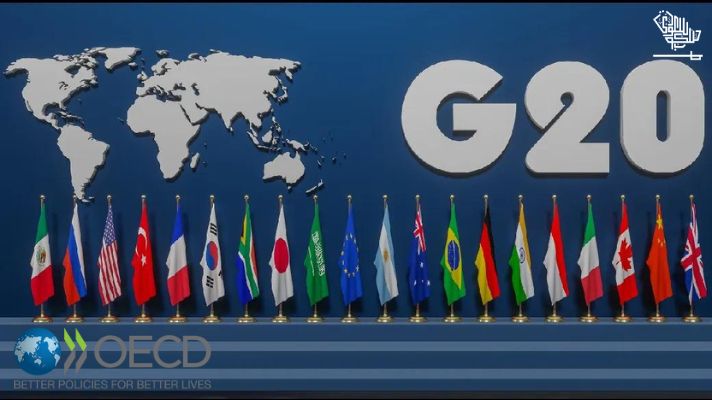 The OECD report states the real GDP growth of the Saudi economy will reach 9.9 percent in 2022 and six percent next year.

Riyadh — Saudi economy will register the best growth rate among the G-20 states for the year 2022 and the following year, 2023. This projection is according to an OECD report by the Organization for Economic Cooperation and Development.

And six percent in 2023, thus recording the highest growth rate among the G20 countries. The report includes the G-20 economy, emerging market economies, and developing economies.

Despite the uphill challenges facing the global economy, the continued inflation, and the slowdown in GDP growth in 2022 and 2023.

The estimates of the OECD report for the Kingdom contradict the dark outlook that stems from several significant factors.

Among these factors are the following:

The OECD report lowered its performance expectations of the global economy for the current year and 2023. Its estimates were influenced by the downshift in growth in most economies in the world.

It is noteworthy that OECD is a unique forum where the governments of 37 democracies with market-based economies collaborate to develop policy standards to promote sustainable economic growth.

According to the OECD report, the impacts of the COVID-19 pandemic are still lingering while the war in Ukraine is dragging growth and adding rising pressure on commodity prices, Mostly affecting food and energy prices.

The stagnating second-quarter Global GDP of 2022 brought an output decline in the G20 economies. High inflation has continued for longer than expected.

In many economies, inflation in the first half of 2022 was at its highest since the 1980s. The global economic outlook has darkened, with recent indicators taking a turn for the worse.

The OECD report follows a similar IMF report on the strong-performing Saudi economy. The IMF report commended the strength of the Saudi economy and its reliable financial position.

It stressed that the Kingdom’s economic prospects are positive in the short and medium term.

This positive outlook is brought on by the continued recovery of economic growth rates, containment of inflation, and the increasing strength of its external financial position.

Recommended: Top Upcoming Mega Projects In Saudi Arabia That We Can’t-Wait For!

It noted that the Kingdom is recovering strongly from the pandemic-caused recession.

It pointed out that the support of liquidity, the momentum of reforms, the increased oil prices, and increased production helped the Kingdom recover quickly.

Arab Ministerial Committee: Prince Faisal chairs the meeting to stop Iranian interference in the reg...
King Salman Returns from the Hospital After A Successful Surgery
Saudi Aramco Issues A Dire Warning; The World Should Be Worried.' Here Are Three Stocks For Protecti...
International Animal Day, LuLu puts on a cat show.
Easy Steps to get a Duplicate Number Plate in Saudi Arabia
HRH King Salman and Crown and Prince Mohammed bin Salman register for Organ Donation Program
Lucid to Set Up Base in Saudi Arabia
Riyadh Zoo - Timings, Location, Entry Fee & Animals
Electric Car Cost Vs A Petrol Car Costs in The US
Entry Ban For Visit Visa Travelers At 4 Saudi Airports From June 9
United Arab Emirates Set Up A Playoff Football Match with Australia
What To Do If Your Saudi Iqama Gets Lost

PrevPreviousKing Salman Says Saudi Arabia Is Keen On A Stable, Balanced Oil Market
NextOneRepublic To Perform In AlUla On November 10Next