After Russia’s Series Of Strikes In Ukraine, Shock, and Terror 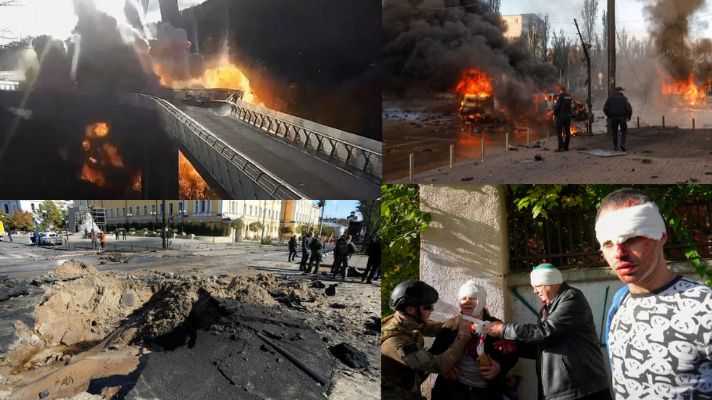 There have been numerous explosions & series of strikes in Ukraine in last few hours. Not only in this city of Kyiv but all over nation.

There is a sense of déjà vu for those of us who were present when Russia’s extensive invasion started in February.

They instructed us to spend as much time as possible in the basement, anticipating more series of missile strikes and drone attacks in Ukraine.

However, this, too, is different. The explosions in Kyiv are significantly nearer to the center. Instead of distant thumps from the suburbs.

There were loud reverberations near streets and places we had grown accustomed to over the previous eight months.

Recommended: Ukraine Stands Defiant in The Face of The Russian Invasion

Their target is hard to figure out. However, according to a statement from Ukraine’s ministry of culture, the Philharmonic building and museums were damaged.

A video on social media showed a massive crater in a children’s playground.

Another displayed a missile impacting a popular tourist spot and viewpoint above the Dnipro River, Mayor Vitali Klitschko’s glass bridge.

Residing in an apartment with a view of the playground in Shevchenko Park are Olena and Valerii Badakh.

“It was terrible. Our lives suddenly had a hole in them. It was awful, ” Olena informed me.

“I have lived here all of my life. I attended this university. My son and now my grandchild grew up here,” Valerii, her husband, remarked. “There are a lot of children here all the time.”

“They likely intended to target the university building and the Hrushevsky monument. Those are significant symbols for us; the attack was symbolic.”

Target symbols? Finding the reasoning at this early stage is challenging. However, other sources report that they hit a thermal power facility in Lviv.

According to President Volodymyr Zelensky, attacks on energy facilities are occurring all over the nation.

When Ukrainians joyously applauded the attack on the bridge connecting Russia with the Crimean Peninsula two days ago, social media became swamped with videos and memes.

These days, all the films show shell-shocked locals, burning rubble, and dire warnings. Even when it seems expected, the shock is still present.