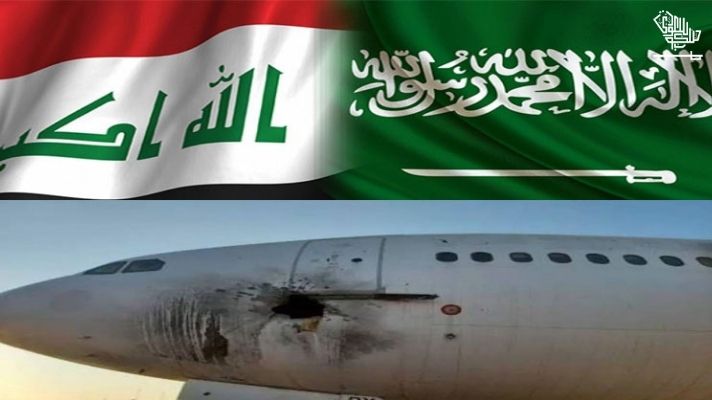 About three rockets landed in the Baghdad International Airport compound near an adjacent US airbase, harming one disused civilian airplane.

According to the Ministry of Foreign Affairs statement on Saturday, Riyadh — Saudi Arabia condemned the terrorist attack that hit Baghdad International Airport. About three rockets landed in the Baghdad International Airport compound near an adjacent US airbase, harming one disused civilian airplane. The police did not report any other damage or any injuries. According to reports, the damaged aircraft was an out of use Iraqi Airways plane.

The Kingdom’s ministry stated that the incident “undermines the efforts of the international coalition to help Iraq fight terrorism,” on the SPA report. According to SPA, the Foreign Ministry reiterated its complete support for the sisterly Republic of Iraq in its measures to safeguard its security and its affirmation of the Kingdom’s position rejecting all forms of violence, terrorism, and extremism.

Rocket attacks, which the US and some Iraqi officials accuse of Iran-backed militia groups who resist the US military in the region, have often hit the complex in recent years. Iraq’s state information agency reported no disruption to travel, citing the country’s aviation authority. The Foreign Ministry of Egypt too deeply criticized Friday’s missile shelling of Baghdad International Airport, which resulted in material damage.

The ministry said such attacks constitute an immediate threat to Iraq’s stability and undermine the freedom of air navigation. It also affirmed Egypt’s full solidarity with Iraq in all efforts to preserve its security and stability, the statement added. Iraqi officials said that the rocket attack targeting the Baghdad International Airport aimed to isolate Iraq internationally by undermining its reputation.

Al-Kadhemi called upon all political groups to express their rejection and condemnation of this dangerous attack, as silence on such attacks is a shelter for criminals. The prime minister encouraged the international community “not to impose restrictions on travel or air transportation to and from Iraq” as a measure to “deter terrorists from achieving their goal.”

Recommended: The Reason Why “God Bless You” Is Written On Every Saudi Plane

No group has so far claimed accountability for the attack. Still, militias repeatedly target Iraqi military bases housing US military advisors across Iraq and the US embassy in Baghdad. According to the Iraqi Civil Aviation Authority, flights have resumed at all airports around the country, including Baghdad International Airport.

In a tweet, Hassan Al-Adhari, head of the Sadrist Movement, said targeting “government facilities, particularly Baghdad International Airport, is the actions of Iraq’s enemies who want to isolate Iraq internationally and economically.”

The UN Assistance Mission for Iraq voiced its concern regarding the ongoing surge of attacks in Iraq targeting political group offices, residences, and businesses, including the recent rocket attack on Baghdad International Airport. The statement advised all the Iraqi groups to move beyond condemnations and swiftly pull together to expose those behind the attack.

Parliament cautioned in a statement the danger of these attacks targeting civilian facilities and infrastructure in Iraq, as they illustrate a flagrant violation of the sovereignty of the Iraqi state and undermine the possibilities of restoring security and stability.

Recommended: Down To The Bones: Archaeologists Discover Ancient Settlement Under Shuweihtia Village

It considered the targeting of Baghdad airport a harmful sign of the escalation of terrorist operations, which harms air traffic and passengers, risks the lives of civilians and innocents, and represents a clear threat to Iraq’s stability and its people’s capabilities.
The Arab Parliament called on the Iraqi groups to show solidarity and stand united in the face of terrorism. — Agencies.

PrevPreviousIndustry Ministry Desires to Convert 4,000 Factories to Digital Industrialization
NextFeb 22 to Be An Official Holiday for The Private SectorNext