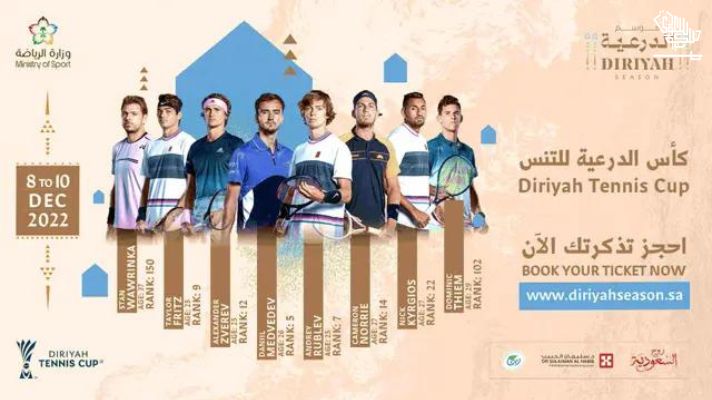 Diriyah Tennis Cup 2022, majestic backdrop of At-Turaif, Riyadh, again serve as the venue for the tournament's second iteration from Dec 8-10

The majestic backdrop of At-Turaif, Riyadh, will again serve as the venue for the tournament’s second iteration. It will run from Thursday, December 8, through Saturday, December 10.

Twelve players will compete in both singles and doubles over the three days. The competition will be at the $3 million invitational tournament, held outside in an arena specifically designed for the purpose.

Recommended: The World Cup Opening Ceremony Will Include DJ Loush

The competition will also include a professional doubles event for the first time. The players who don’t advance in the singles on day one will move into a doubles format on day two, in this new format.

World No. 5 Daniil Medvedev, who won the inaugural Diriyah Tennis Cup in 2019, has been confirmed for the competition.

The 2021 US Open winner will return to Saudi Arabia to defend his title. He will be capping a year that saw him achieve his first-ever ascent to the world rankings.

The Olympic champion Alexander Zverev is making his debut in the Kingdom. After missing the French Open this year due to injury. The German player will return to action at Roland Garros.

Other top-ten player joining the Diriyah team is British No. 1 Cameron Norrie and World No. 7 Andrey Rublev.

With triumphs in Marseille, Dubai, and the Belgrade Open, where he defeated Novak Djokovic in his tournament. Rublev has won three ATP titles this year.

Norrie, ranked 14th in the world, followed up his breakthrough 2021 season with two ATP victories in 2022, including a trip to the Wimbledon Semifinals.

Dominic Thiem, a former World No. 3 major winner, is also competing. After suffering a wrist injury in 2021. The Austrian is now 29 years old.

He is still improving and finding his form. Stan Wawrinka, a fan favorite from the 2019 Diriyah Tennis Cup, is playing with Thiem.

With a tournament ranking of 40, Kyrgios became the first unseeded men’s singles Grand Slam finalist since Joe-Wilfried Tsonga (France) at the Australian Open in 2008, when he advanced to the Wimbledon 2022 final.

In 2022, Fritz also had a fascinating season. The 25-year-old joined the world’s top 10 in October. He is presently the tennis player with the best ranking in the United States.

At Wimbledon, he overcame Rafael Nadal twice in a row to go to his first Grand Slam quarterfinal.

The Diriyah Tennis Cup is a component of the Diriyah Season. It is a four-month live sporting, entertainment, and cultural festival. It gets held in the Saudi Arabian Kingdom’s original location.

More than 7,000 tennis fans may experience a unique environment in the contemporary Diriyah Arena. Tickets start at SAR100 on December 8 for Thursday, SAR150 on December 9, and SAR200 on Saturday finals.

On Day 1, tickets for the front rows start at SAR300, and luxurious VIP seats are available for SAR1,500.

“We are overjoyed to see top-tier tennis return to the Kingdom of Saudi Arabia. The 2019 edition was a huge success and drew thousands of spirited spectators from all around the nation and the region.

We warmly welcome visitors worldwide and anticipate watching the intense competition. During what is sure to be a fun evening of tennis in the historic city of Diriyah.”

SFDA Cautions Against Miswak's of Unknown Origin
Renewal/Re-registration Of SCFHS Mumaris Plus
Eleven Categories of Students Exempted on-Campus Attendance
Employers face jail if they permit their ex-pat workers to work as self-employed
Crown Prince offers condolences to the Al-Nahyan family and UAE leaders
Saudi Arabia Teaches Indonesians About Moderation, According to A Minister
The Games begin! Tokyo 2020 kicks off with Alireza and Al-Dabbagh carrying the Saudi flag at the Oly...
Saudi Arabia Rules Out A Shortened Workweek
Biden to Visit Saudi Arabia in Mid-July — Royal Court
The Severe Cold Wave in Saudi Arabia to Decrease from Monday
Baseless: News of Saudi Forces Withdrawal from Coalition
Saudi Arabia begins the second round of vaccination for all targeted age groups 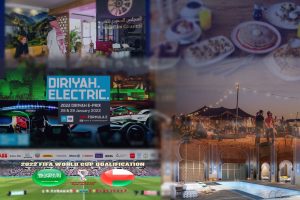 PrevPreviousThuwal Beach Jeddah; Swim, Relax & Have Fun
NextAlUla Arts Festival Will Have A Significant Andy Warhol Display In 2023Next