A nail-biting match that featured two greats of the game facing each other for possibly the last time Who came out on top.

A nail-biting match that featured two greats of the game facing each other for possibly the last time Who came out on top?

The match was highly anticipated and for all the rights reasons. Club footballing giants, PSG, were coming to Riyadh to play against Al Nassr and Al Hilal combined. More importantly, Messi and Ronaldo were pitted against one another.

The friendly exhibition match boasted great names such as Sergio Ramos, Marquinhos, Mbappe, and Neymar. The players delivered in spades as we saw a goal-fest with a total of 9 goals; PSG scored 5 in response to Saudi XI’s 4. 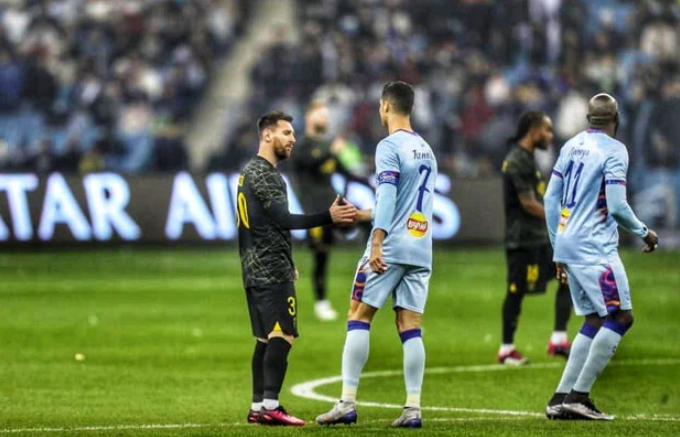 Which players stood out?

Well, one of the first things has to be that Ronaldo still got it. On his debut on Arabian lands, Ronaldo scored twice: once from the penalty spot and the other from a tap-in from his chance.

Such results were bound to happen as Ronaldo was the target man, playing up front with a second striker who was to set up Ronaldo. His brace earned him the man of the match award as well.

That goes down as one hell of a debut in our books against arguably the most potent center-back pairing in Europe, Marquinhos and Ramos.

The other highlight of the game was Messi’s performance. We knew he was a significant threat to any defense in the world, but he opened the scoring for PSG in the third minute.

He was present everywhere in the game. His goal was a tidy finish as well, putting a bouncing ball past the keeper on his first touch.

Tipped as the heir to Ronaldo-Messi’s throne, Mbappe left his mark on the match. Assisting twice and scoring once from the penalty spot, he was difficult to control, as always.

Bursting with pace, flashy stepovers, and perfect team play, Mbappe showed his mettle in a match that was presumable dominated by Messi and Ronaldo.

What are the talking points?

Well, we’ll have to mention the fact that Neymar, unfortunately, missed a penalty. While not his worst performance, he was bang-average and is in unison with the disappointing world cup he had.

Surprisingly, this contrasts his first half of the season, where he was in blistering form, having 21 goal contributions in 28 appearances. This total is already more significant than his last season’s tally.

Neymar failing to score from the penalty spot.

The scoreline also raised a few eyebrows. Not many expected the match to be this even of an affair. With the star-studded lineup that PSG has, on paper, they were supposed to roll over the Saudi squad.

In reality, the Ronaldo-led unit kicked and fought till the last minute scoring their 4th goal in stoppage time. This is evidence of the Saudi League’s caliber and is a testament to Ronaldo’s words about the quality of football.

What is the big picture?

Interestingly, this match comes successively after the Qatar WorldCup and Morrocco’s fairytale run. It shows a more outstanding commitment and interest by the Arabian and African world toward football.

With Ronaldo’s signing, a rise in the game’s popularity on this side of the world is inevitable. It will be interesting whether we see other major stars follow suit and join the Saudi League. We can’t say much about the future except that it’s looking bright for football.

Manchester United’s, The Cristiano Ronaldo Latest Interview And His SAGA

Messi Lifts The World Cup, And Here’s How It Happened

Ronaldo vs. Messi, One Last Time

Explore The Zone Riyadh: A Journey Through Culture, Entertainment & Adventure in the Heart of the City

Kaifi Khalil – The New Artist Taking Spotify By A Storm