National Strategy for Industry got introduced on Tuesday by Crown Prince Mohammed bin Salman, to achieve the goals of Saudi Vision 2030.

Jeddah —The National Strategy for Industry got introduced Tuesday. By Crown Prince and Prime Minister Mohammed bin Salman. The strategy was to achieve the goals of the Saudi Vision 2030.

The plan concentrates on 12 sub-sectors to broaden the industrial economy of the Kingdom. It also identified over 800 investment opportunities worth SR1 trillion simultaneously.

“Saudi Arabia will develop into a major industrial power through this approach and in collaboration with the private sector.

According to the Crown Prince, the chairman of the Council of Economic and Development Affairs. “that helps to secure global supply chains and sell high-tech products to the world.”

“We are in a position to develop an industrial economy that is both competitive and sustainable.

Thanks to the driven young people, the unique geographic location, the abundant natural resources, and the top national industrial firms. “added he.

Recommended: Do You Need a Business Visa to Travel to Saudi Arabia?

The strategy aims to create an industrial economy that draws investments. According to the Saudi Vision 2030, this helps to achieve economic diversification and develop the local economy and non-oil exports.

To diversify the industrial economy of the Kingdom, the National Strategy for Industry concentrates on 12 subsectors.

To create a new chapter of sustainable growth for the industry and meet the Kingdom’s ambitious economic returns goals by 2030.

They are creating tens of thousands of high-quality employment. The strategy aims to raise exports of advanced technology products by nearly six times. They aim to increase the overall value of additional investments in the industry to SR1.3 trillion.

One of the cornerstones of Saudi Vision 2030 is the industrial sector, which is given a lot of attention by its leadership.

Launching the National Industrial Development and Logistics Program, They created a separate ministry to oversee the industry. They also founded several new initiatives and organizations in addition to this.

After Vision 2030, their number increased by more than 50%, reaching 10,640 industrial facilities in 2022. By 2035, there should be roughly 36,000 manufacturers, according to the strategy’s ability to spur sector growth.

Saudi Arabia seeks to achieve global leadership in a select group of commodities. By investing in promising new technologies.

The strategy also aims to increase the flexibility and competitiveness of the industrial sector, which ensures continuity of access to critical commodities for the welfare of citizens.

To accomplish these challenging national objectives. The Supreme Committee for Industry presided over by the Crown Prince, was established as a model for the industrial sector’s governance.

Along with the establishment of the Industrial Council. The presence of the private sector means that industrial investors are involved in decision-making and policy formulation.

Based on solid industrial foundations and achievements, the industrial sector of the Kingdom developed over 50 years.

Leading national industrial enterprises are also present in the Kingdom. These enterprises helped to elevate the Saudi industry to the ranks of developed industries on a regional and international scale.

The Kingdom currently ranks as the world’s fourth-largest producer of petrochemical goods.

At the same time, its industrial outputs support the creation of numerous industries by feeding worldwide supply and manufacturing networks.

The Fourth Industrial Revolution and other industry trends align with the strategy’s debut.

Bahrain Launches Golden Permanent Residency Visas
What are Iqama and Huroob Status
Houthis have to be held accountable for war crimes: Saudi Arabia tells the UN.
Saudi Arabia Celebrates Three Centuries of Glorious History on Founding Day
Zain International Balance Transfer Service For Pakistan, India, The Philippines, And More
Top Weekend Activities In Jeddah From December 1 to 3
Jawazat Starts Its Second Phase of Issuing Saudi E-Passports
Private Health Firms Can Not Detain Patients or Dead Bodies For Financial Dues: Saudi Ministry of He...
Saudi Gold And Its Authenticity
Supreme Court called on Muslims to look for the Dhu Al-Hijjah crescent moon on Wednesday
Saudi Bid for the AFC Asian Cup 2027 Launched in Joint Workshops with AFC
Changing the Mobily Sim Language from Arabic to English and Vice Versa 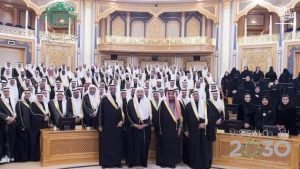