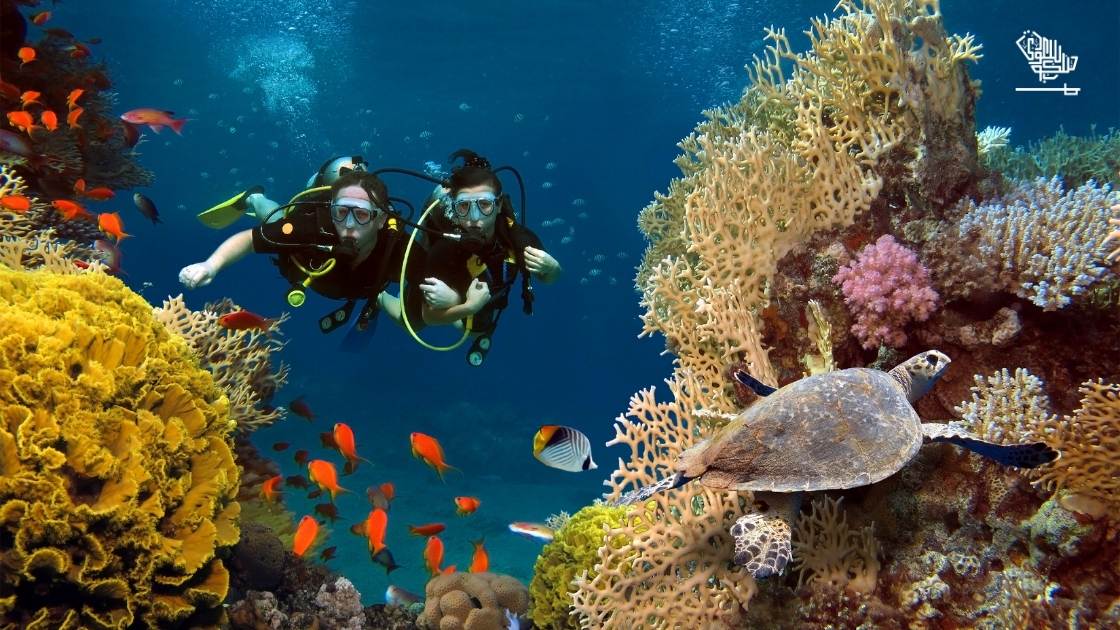 Experience the Marine Life and the Red Sea Wrecks up close.

Unspoiled, the Red Sea coast of Saudi Arabia is an underwater treasure trove, and it isn’t a secret that diving (scuba diving) in Saudi Arabia is considered the ultimate adventure.

The growth of dive shops in cities like Jeddah, Yanbu, and Al Lith gives both beginners and advanced divers an equal opportunity to experience diving in Saudi Arabia.

If needed, Divers can seek treatment for decompression sickness or as commonly know ‘the bends,’ at two hospitals in Jeddah and the Armed Forces Hospital at King Abdul Aziz Naval Base in Jubail.

The climate in Saudi Arabia is beautiful for diving all year round. The Water temperatures of the Red Sea stays at a fluctuating constant between 77 and 95°F (25 to 35°C).

During the July through October summer season, diving in the Red Sea feels like a swim in a giant, warm bath.

Visibility is just as convenient as the temperature.

Diving experts with years of experience in the region recommend going out late in the afternoon, with the sun illuminating the splendid red corals and the distinct ecosystem of the Red Sea.

Discoveries of ancient shipwrecks along the Saudi coast are good reasons to take the Red Sea plunge.

The latest 2015 discovery by Saudi and German archaeologists found an old Roman vessel and another ship dating from the early Islamic period.

The most conservative estimates suggest that there are many other shipwrecks lying under the sea awaiting discovery.

The ‘special’ about diving, shark sightings, imagine an encounters with the elusive whale shark, this almost guaranteed if you are diving off the coast of Saudia.

Jeddah is the most accessible place to find a diving adventure in Saudi Arabia.

The seaside city contains a variety of dive shops, all suited for beginner and seasoned divers.

Divers who want to see an authentic view of Saudi Arabia should consider a trip to Yanbu, located 200 miles north of Jeddah, or the Farasan Island, on the southern coast.

Airline flights from Jeddah to Yanbu are pretty inexpensive and only require one hour of flying time.

Similarly, Jizan Regional Airport near Farasan Island is an hour and a half from Jeddah by plane.

Some of the best diving sites in Saudi Arabia are right there on the shores of Jeddah.

It is also where the biggest seaport in Saudi Arabia is, and Jeddah town loves its proximity to the Red Sea and a wealth of tourist attractions.

Jeddah is a favorite destination for both seasoned and novice divers.

Dive shops are easy to find within the city limits, and Red Sea expeditions can be booked any day of the week.

The location is shallow enough for novice divers and packed with sights that even the most advanced diver would not want to miss.

Lying at a depth of four and eighteen meters below the surface of the Red Sea, the Boiler Wreck is the right starting point for diving in Saudi Arabia.

The shipwreck is believed to be over a century old, and dive enthusiasts can explore many coral-covered caves and caverns around the vessel.

The coral near the Boiler Wreck covers older shipwrecks that are hard to spot – but fun to seek.

Advanced divers can ask for the drop-off near the west end of the wreck, where they follow a wall to the underwater treasures nearly 45 meters deep.

Divers will find black, pink, and red corals and possibly sharks and manta rays at this depth.

Larger fish like bonito, bluefin jacks, and kingfish also have been known to hang out near the deeper side of The Boiler Wreck.

Located at the 26-Mile Reef, the Ann Ann Wreck is the largest Shipwreck site near Jeddah.

It also is rated as the most difficult dive in the region but still offers some breathtaking moments for amateurs.

The 1977 wreck stands almost entirely upright, making the bow visible from only 5 meters down.

Stern of the wreck is visible at a depth of 32 meters.

Because of the damage, especially in the deeper waters, even the best divers are warned to be extra cautious.

Swimming through the galley or the captain’s room, divers get to see tuna, bluestripe snappers, and blue-spotted stingrays.

Divers have a choice to view three wrecks in a single dive when visiting Miss Marie.

While this location is a bit difficult to approach, the reward is a host of marine life and a close-up view of three sunken ship bows poking out from the surface of the water.

The ships are largely intact, and divers of all levels are allowed to explore the winding gullies and brightly colored coral.

The reef is home to manta rays, sea turtles, and scores of unique fish.

Divers might also get to see sharks of different species, including the hammerhead, reef, lemon, tiger, and silky shark.

The wreckage of the ship Staphonos is called the Cable wreck because of the construction materials scattered all around its crash site, including the Cables that the vessel was carrying when it sank.

This Abu Tair Reef wreck makes for an excellent diving trip and an underwater scavenger hunt.

Divers of all levels of expertise can explore the underwater cables, steel beams, chain link fence, and sheets of asbestos lying at a depth of 24 meters.

The wreckage is considered an easy dive with big rewards, and divers that swim around the bow will certainly get to meet the resident guitarfish.

The guitarfish is unusual and also known as a guitar shark because of its elongated body, resembling a manta ray and shark rolled into one.

This tiny island is a favorite for divers and tourists alike, located just off the coast of Al Lith, south of Jeddah.

Al Lith Island has a white sandy beach bordered by shallow, clear blue waters, perfect for both snorkeling and swimming.

Seasoned divers love the area because it is a known site for whale sharks’ sightings and large fish of various varieties.

Visitors to the island set up camp and spend the next few days diving and exploring this dry island, which features mountain ravines and a network of caves.

Where to stay while diving in Jeddah

Jeddah is home to many diving resorts and hotels situated at the city’s marinas.

For an all-inclusive experience, tourists can choose a hotel that offers diving courses onsite, or at the very least, can recommend certified instructors and equipment.

This diving haven comprises 84 islands teeming with marine life that both beginners and seasoned divers can explore and enjoy.

Depths here range from 10 to a whopping 500 meters, and this part of the Red Sea is known for colorful clownfish, Barracudas, moray eels, and many species of sharks.

Divers in search of a shark sighting should visit between March and June.

Guests can find enough activity on the islands to keep them entertained for an entire week.

The islands are popular for their white sandy beaches and historical sights, like the sandstone village of Al Qassar.

Tourists reach Farasan Island by taking a 40-minute ferry ride from Jazan Ferry Port or a thirty-minute flight from Jeddah to Jazan.

Located in northern KSA, almost 200 miles from Jeddah, Yanbu is the second most visited location for diving in Saudi Arabia.

Yanbu is home to the Seven Sisters, a region known for its hammerhead shark sightings.

Its underwater world is dotted with colorful coral, with schools of barracuda swimming along with hammerheads and other shark species.

The best thing about Yanbu is that divers can discover brand new sights and underwater treasures as yet largely unexplored.

Flights from  Jeddah to Yanbu’s Prince Abdul Mohsin Bin Abdulaziz Airport take about an hour and a half.

The Red Sea could be the most popular diving destination in Saudi Arabia, with tourists often forgetting that KSA borders the Arabian Gulf as well.

Travelers can find the most unique diving experiences when visiting Al Khobar, Dammam, and Dhahran, or they could drive an hour to the north to the less-crowded reefs of Jubail.

Several trusted dive shops offer scuba diving and snorkeling experiences here in the Eastern Province located on the shores of the Arabian Gulf.

Divers can stay over at the capital city of Dammam and visit the nearby towns of Al Khobar and Dhahran. Here Half Moon Bay is the most popular site for diving.

Its enclaves are made up of an artificial reef, formed with sunken cars and vehicles; they are teeming with marine life.

Jubail is a unique diving experience in itself, and divers who decide to take the plunge here in the Persian Gulf get to explore Fanateer Reef along with Jana Reef and Jana Wall.

Jana Reef and Jana Wall both are a part of Jannah (also spelled Jinnah and Jinna) Island.

Dive shops in Saudi Arabia are equipped to provide guests the best and safest diving and snorkeling experiences.

These shops are often have franchised locations in different cities, and some also partner with diving excursions and liveaboard experiences.

Training packages include scuba gear and transportations by boat, and guests only enjoy the experience while the experts take care of the details.

Tourists are recommended to research PADI courses in Saudi Arabia to decide which course suits them best.